If you want to make a Pakistani freak out, just say the words “sex education” to them. Apparently the idea of educating their children about what happens to your body, how to deal and cope with menstruation, and how to avoid sexually transmitted diseases (just three topics out of this vast subject) makes them afraid that Shaytan is coming for their children, and them too, for allowing such “gandi batey” (dirty talk) to be discussed.

A few days ago I was bemused by the Tweet of a self-proclaimed pop star called Rabi Pirzada, who posted a video of herself railing against sex education because it “ruins the innocence of our kids”.

It’s a common myth that in Pakistan, sex education means teaching three year olds about sexual positions. Talking to people about the subject reveals the reluctant concession that it should not be called “sex education” but something innocuous, like “health and hygiene” or “life skills.” Programs in Pakistan already use these names, or the acronym SRHR (sexual and reproductive health and rights), like this one in a Sindhi village that teaches girls, starting at age 8, about sexual harassment, body changes at adolescence, and the idea of consent, even in marriage.

It’s astonishing that we are complacent about child marriage, where millions of Pakistani girls (and some boys) are expected to get married and have sexual intercourse, but we want them to remain ignorant of what is expected of them in that marriage. That we don’t mind millions of underage pregnancies, but that those girls shouldn’t even know how they get pregnant in the first place, let alone what they could do to prevent those pregnancies.

How sad that we need to cater to the sensitivities of adults, and twist ourselves in circles to avoid offending their delicate sensibilities. Meanwhile, many children’s first sexual experience in Pakistan is one of molestation or abuse or incest. Schools gingerly attempt to include SRHR on their curriculum, then one parent spills the beans and in the ensuing protest, the school withdraws the subject and apologizes.

I can’t understand where this prudishness comes from. In Islam, the early Muslims were encouraged to ask all sorts of questions about sexual health, hygiene, intimacy, and comportment from the Prophet himself, peace be upon him, or from his wives. Openness and truth was encouraged. Science and rationality were lauded. The Quran even talks about conception in detailed terms. Are we really not able to handle this information if even God wants us to know about it? 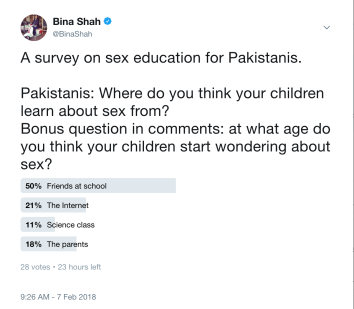 Of course sex education is age appropriate. Experts design the programs, they know what children are and aren’t able to handle. But say the words “sex education” to Pakistanis and their brains short-circuit. Maybe they just hear the first word and not the second. Maybe it’s just a knee-jerk reaction bred into them from generations of prudery and fright. But keeping children ignorant for the sake of preserving their innocence is actually harming them in the long run. Who knows what revelation it will take to make Pakistanis understand.

Writer View all posts by binashah

1 thought on “What’s so scary about sex education?”